From Caveman to Modern-man: The history of BBQ 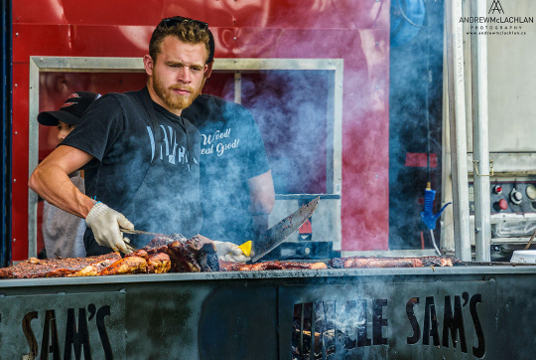 21 Mar From Caveman to Modern-man: The history of BBQ

From Caveman to Modern-man: The history of BBQ

Our obsession with barbeque started about 1.8 million years ago, when man first discovered cooking meat with fire. But lets fast forward a little bit. The word “barbeque” was derived from the Taino people of the Caribbean, who would grill their meats of a raised wooden grate called a “barbacoa”, and when a Spanish explorer discovered this, the concept took off. And much like the current fusion cuisines we see today in hip new restaurants, it seems every culture has their own version of barbeque. From the American BBQ, to the South African Braai, to the Australian Barbie, cooking meat over an open flame is both culturally important and seriously delicious.

Barbeque has been a staple for many American families through generations. It’s not just the food that makes a barbeque, either, oftentimes when we say barbeque we’re referring to an outdoor party, and the focal point is the grilled meats, but the real treat is the quality time you spend with family and friends. And if we’re getting really specific, a barbeque is actually when you grill meats over an indirect flame (usually a wood fire) for a very long period of time (sometimes as much as 18 hours!), and the resulting meat is infused with smoke which add to the juicy and tender flavours.

According to Planet Barbeque, the first commercial charcoal briquette factory was designed by Thomas Edison and built by Henry Ford in 1921, and it was well known that many United States Presidents throughout history were big fans of a good BBQ. George Washington would have barbeques that lasted 3 days, and Abraham Lincoln’s parents had barbeque for their wedding meal. As such, traditional barbeque as we know it is distinctly American, and drums up images of sunshine and blue skies, good music playing and that unmistakable smell of a smokey grill.

Make sure to join us at Ribfest this summer so you too can experience the sights, smells, and sounds of what barbeque is all about!

Sorry, the comment form is closed at this time.

We use cookies to ensure that we give you the best experience on our website. If you continue to use this site we will assume that you are happy with it.OkPrivacy policy